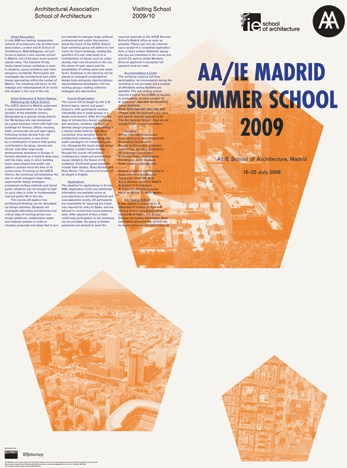 Urban Endurance & Hybrid Spaces: Rethinking the AZCA District The AZCA district in Madrid underwent a rapid transformation in the middle decades of the twentieth century. Designated as a special zoning district, the 190-hectare site was envisioned as a great business centre with high-rise buildings for finance, offices, housing, hotel, commercial use and open space. Following models derived from old dominant principles, it was driven by a combination of factors that quickly contributed to its decay, demise and disuse. Like other large-scale developments elsewhere in Europe, it became obsolete as it failed to keep pace with the many ways in which building types, open spaces and public use patterns evolved since the time of its construction. Focusing on the AZCA district, the workshop will emphasise the way in which emergent urban ideas, experimental design strategies, processual working methods and hybrid public initiatives can be brought to bear on such sites in order to fundamentally improve public life in the city. The course will explore how architectural thinking can be stimulated via design activities.

Students will investigate alternative architectures and critical ways of working across new design platforms, collaborative media and material systems in order to visualise proposals and ideas that in turn are intended to energise larger political, professional and public discussions about the future of the AZCA district. Each workshop group will define its own vision for future buildings, relating the specifics of a real case-study to a consideration of issues such as urban density, high-rise structures in the city, the nature of open space and the possibilities of uniting parks and urban farms. Emphasis in the teaching will be placed on emergent computational design tools alongside interdisciplinary representational techniques, with the working groups creating collective strategies and approaches.”